Naturally, parents seek the best for their children, especially in relation to their health. Actually, the growing focus on hyper- cleanliness, partly due to the constant advertising that guilt and scares parents into buying more products, does more damage than good.

We will tackle here the reasons why it is better to let your children play in the dirt every now and then. Kids always put dirty things in their mouths, which is a universal behavior and there may be an evolutionary reason for it.

Many researchers have concluded that the millions of viruses and bacteria that enter the body are important for the development of a healthy immune system.
The bottom line is organisms that are present in untreated water, feces and mud were with us right from the start of humanity. They help activate the tolerance of the immune system, which is basically now – over the course of evolution – attacking things it should not be attacking.

A study in 2010 found that a bacterium naturally found in soil (Mycobacterium vaccae) can brighten moods and accelerate learning by raising serotonin levels and stimulating neuron growth. Experiments are already conducted to use the bacteria as a possible treatment for depression.
Another study in 2019 discovered the bacteria on the surface of our skin are necessary for combating inflammation when we get injured.

According to researchers, this bug (staphylococci) dampens down overactive immune responses, which can cause bruises and cuts to become painful and swollen. So, you can say these germs can be good for us.

Researchers at Harvard Medical School studied two groups of mice – one was exposed to microbes and the other was raised in a germ- free environment. They found the group with microbe exposure had significantly lower numbers of inflammatory immune cells. Scientists now are working to identify the microbial factors important in fighting against allergies and asthma. 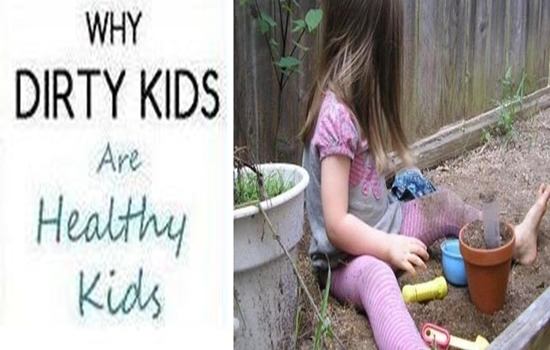 MORE ABOUT KIDS’ WORRIES AND HOW TO REASSURE THEM

MORE ABOUT KIDS’ WORRIES AND HOW TO REASSURE THEM

YOU CAN MAKE MONEY THROUGH YOUR HOBBIES

4 Causes of Having Cold Fingers All the Time

Do you look older than your age, what are the causes and solutions?

3 Telling Signs That Your Environment Is Making You Gain Weight

How Does Clove Oil Help With Acnes

Health Tips That Can Boost Your Health and Beauty a Lot

How to Get the Motivation to Exercise

4 Things You Should Be Careful About When Choosing Jewelry