Although it may not be harmful if taken in moderate amounts, you may be extra cautious and hold back on bacon and other similar like beef jerky and lunch meat if you are at a higher risk of certain health conditions like high blood pressure and heart diseases, bacon contains nitrate which has been showed to increase the risk of cancer in animals.

As mentioned in a study done by the American Journal Of Clinical Nutrition in 2009, both nitrates and nitrites are often linked to cancer and infant methemoglobinemia which is a blood disorder, bacon contains nitrite in a form called sodium nitrite, which is used to protect the meat and keep it from pathogens. According to the University of Minnesota Extension, sodium nitrite which is found in bacon release a substance called nitrosamines which has been proven to increase the growth of cancer cells in animals, bacon that is cooked at a high heat release more of that substance then the mildly cooked one.

Although some fats carry some health benefits like unsaturated and polyunsaturated fats, bacon contains a high amount of saturated fats which when taken in high amounts can lead to plaque build ups in the arteries as well as increasing the risk of heart diseases.
While saturated fats was recently proven to raise the levels of good cholesterol, they also increase the levels of bad cholesterol, increased levels of bad cholesterol leave you at a high risk of many chronic diseases like heart attacks, strokes and heart diseases due to the plaque build up that happens over time of eating foods that raise cholesterol levels.

Bacon is also very high in sodium, one slice of cured bacon can easily contain 194 milligrams of sodium while the daily recommendations of sodium shouldn’t exceed 1500 to 2300 milligrams depending on your age and state of health, meaning that only three slices of bacon can make up for about 25% of your daily allowed amounts of salt.

Fortunately now you can find varieties of bacon hat is low in sodium, one slice of the low sodium bacon product can contain 82 milligrams of sodium, according to studies people who eat two ounces serving of processed meats a day are at a high risk of developing type-2 diabetes due to the high sodium content and nitrites.

If you want to enjoy bacon at a lower cost of your health then make sure to cut off fat prices and avoid adding any extra salt or seasonings to the bacon or whatever food your are eating beside bacon, make sure to drink plenty of water to flush out the high levels of sodium in your body and from time to time consider substituting bacon to healthier alternatives like turkey bacon which is lower in sodium, fat and overall calories. 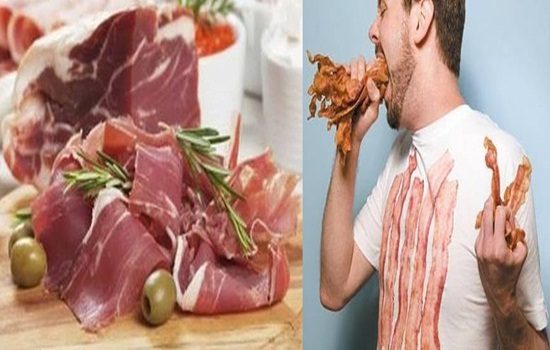 What Is Nitrates And Why It Is Beneficial

Five Things To Consider When You Get Pregnant

MORE ON HOW HIKING CAN CHANGE OUR BRAINS PART II: MORE BENFITS OF HIKING IN NATURE

Tips to improve your mood in the morning

The Foods That Cause A Quick Weight Gain

3 Ways You Can Use Milk To Enhance Your Beauty

How to Replace a Bad Breath with a Fresh One