Many people now have chosen to apply the reasonable choice of substituting regular protein sources in their diets with fish. It makes sense seeing as fish is relatively cheap, easy and quick to cook, rich in many nutrients beside protein, and low-fat. However, I don’t think you should go all out in your “substituting veal with eel plan”. There are some types of fish many studies suggest you should never eat, such as:

1- Imported Shrimp: Eating it is just like eating of the trashcan. It is the dirtiest fish contaminated with substances like residues of chemical used to clean pens, antibiotics, vermin hair, insects remains, E. coli. Almost all of the shrimp you eat is imported and it rarely gets inspected.

3- Imported Catfish: most of this fish is imported from Vietnam where they use antibiotics that are outlawed in the US. Moreover, this fish isn’t inspected as it should be.

4- Yellow or silver eel (Commonly known as American Eel) : It is usually used in sushi. It is highly contaminated with PCB’s & mercury. This eel’s fisheries are usually polluted and are overharvesting the fish.

5- Caviar comes from wild-caught sturgeon and beluga. Overfishing and high levels of pollution in the water of these fish species are also a problem here.

6- Atlantic Bluefish Tuna is another type of fish you should avoid. It contains highest levels of mercury contamination of any tuna. Moreover, this poor fish is overharvested in a way that will soon make it extinct.

7- Both wild and farmed Atlantic Salmon: The farmed type of this fish contains diseases and parasites making it in need of antibiotics and pesticides. Also, wild Atlantic salmon is illegal to capture because fish stocks are rapidly decreasing in numbers. You also may buy genetically engineered salmon under the presumption that it is wild salmon, and it has less taste and flavor, less protein and more fat. 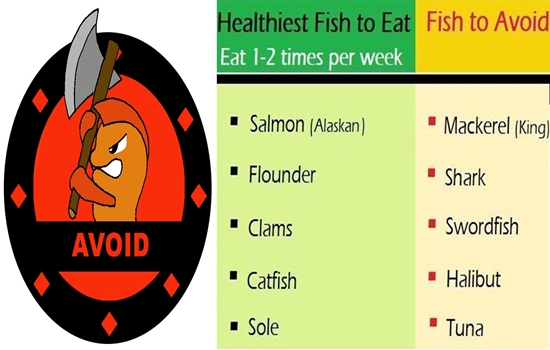 7 Common Types of Coughs and What They Indicate

7 Common Types of Coughs and What They Indicate

What To Do When Your Smart Phone Drop In Liquid

DO YOU KNOW THE TOP DESIRED RETIREMENT ACTIVITIES?

Things You Should Avoid Saying When Talking to a Parent

WHY ARE YOU SO TIRED? TOP CAUSES OF FATIGUE

The Top Reasons Why You Are Eating More