Have you ever wondered why people are launching what looks like a crusade against inflammation? If you have and already did your research, then you must have already known that inflammation causes major damage to your tissues causing many serious diseases in the process, such as hypertension, skin problems, and even cancer. It is caused by certain foods, such as:

1- cream cheese is a favorite for almost everyone (with its creamy texture and multitude of flavors, it is is easy to love). However, cream cheese is loaded with omega 6 fatty acids, and these fatty acids lead right to inflammation. Healthier choices of cheese that is easy to spread include goat cheese and ricotta.

2- Most types of vegetable oil are avoided for a good reason. They
are rich with omega 6 fatty acids that lead to inflammation. Some of the most harmful vegetable oils are corn oil, soybean oil, safflower oil, sunflower and cottonseed oil. Healthy oils you can use instead include coconut oil, or canola oil.

3- Opinions are conflicted about Fat in milk and whole fat milk. It is true that milk fat is rich in omega 6 fatty acids. So, to avoid inflammation from milk fat and still enjoy their benefits, you could use 2% fat milk instead.

4- Some types of meat contain a serious amount of fat (which – as you might have concluded by now – is the main reason for inflammation). These inflammation causing Meats include bacon, bologna, hot dogs, burgers or ribs. A healthier (and more affordable) choice would be chicken or fish meat.

5- Another thing that can trigger inflammation is partially-hydrogenated acids contained in things such as Crisco, margarine and fake butter. They are also dangerous for their high content of chemicals added to them to make them look like real butter when they aren’t. 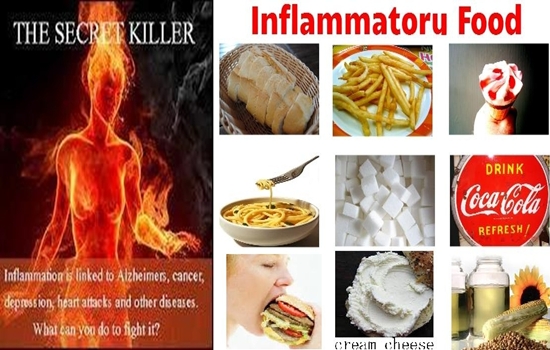 The Importance Of Vitamin B12 and The Richest Foods With It

The Importance Of Vitamin B12 and The Richest Foods With It

The Top 6 Commandments for Fruit and Vegetable Choosing Guidebook

7 habits to be a successful person

5 Signs There is a Problem in Your Thyroid Gland

MORE ABOUT THE MORNING RITUALS THAT CAN CHANGE YOUR LIFE

Want to Sleep Like a Baby? Know How to Choose the Perfect Mattress

Four Reasons To Stay Away From Soda Like A Disease

Great tips for slowing down aging