However, technology has many disadvantages, some of which will be mentioned here.

1- Technology makes people fat. You use machines to go anywhere and do anything. As a result, you no longer walk or shop yourself. You don’t even wash your plates by hands. And with lack of movement and exercise, you gain pounds.

2- Technology makes people really dependent on it. Let’s say you are using your mobile phone most hours of the day. What will happen if it is somehow ruined? I guess you would turn into a fire breathing dragon who vents its frustration on anyone around until you get a new one. This dependency on technology can bring out the worst in us.

3- Did you know that technology has resulted in unemployment of many? Many machines now do what humans used to do before. So, what is the point of hiring humans when machines can do their work for free?

4- It draws people apart. Social media is considered a type of technology. Although it seemed cool at first that people could talk to so many people and have so many friends with social media, the reality is that people do that from behind a screen.

They don’t really meet any of these friends or see them face to face. So, ironically, they feel lonely although they have more than 500 friends on their Facebook accounts. 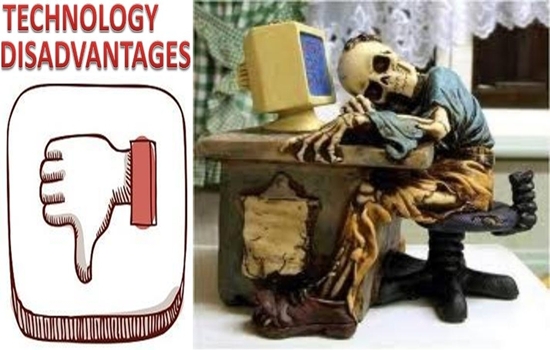 How to Recognize Your Headache from its Symptoms

The 10 Most Important Tips You Should Apply before Your Wedding

Is chewing sugarless gum important for your health?

Quick Banana Pudding in the Microwave

6 reasons Why people avoid you

Why Your Sleep Get Disturbed Often.