With the presence of microwaves in our lives, reheating leftovers sound convenient, who wants to spend two hours cooking after a long tiring day of work? While reheating leftovers does save time, effort and even money, it could pose a danger to your health when it comes to certain types of foods. It was proven scientifically that reheating certain types of foods can be poisonous, below is a list of the foods that shouldn’t be reheated, so the next time you cook them just make sure you only cook enough to eat immediately.

It is not safe to reheat spinach, so eat it all once it is ready, spinach was found to have nitrates that transfer into nitrites when reheated, nitrites are hazardous because they are carcinogenic, it doesn’t happen from just once though, so avoid reheating spinach and just eat it fresh or once it is ready.

Beets are same like spinach, you can warm them up but avoid reheating them because of their nitrates content.

Chicken can cause digestion problems when eaten the following day because the protein structure in them get changed so it is recommended to either eat it cold or heat on low fire for longer time.

Celery is another source of nitrates, just like spinach, reheating cause the nitrates to transform into carcinogenic nitrites, celery is mainly found in soups so when you come to reheat your soup, remove the celery first, the same applies for carrots.

You probably already heard that mushrooms shouldn’t be reheated, eat them when they are just cooked or cold, reheating mushrooms may cause digestion problems and trigger heart issues.

Potatoes are healthy and nutritious, however when they sit for one or two days, they lose their nutritional value, so the problem is not exactly with reheating them but with keeping them cooked for a while before eating them.

Most of us reheat rice, however, rice start generating bacteria very quickly after cooking, those bacteria produce toxic proteins into the rice, when the rice get reheated, the bacteria does die, however the toxins the bacteria left behind don’t get inactive, so it is not recommended to leave rice for a while after cooking it.

Reheating this protein rich food, change the structure of protein within it, which can put so much pressure on your digestive system to breakdown. 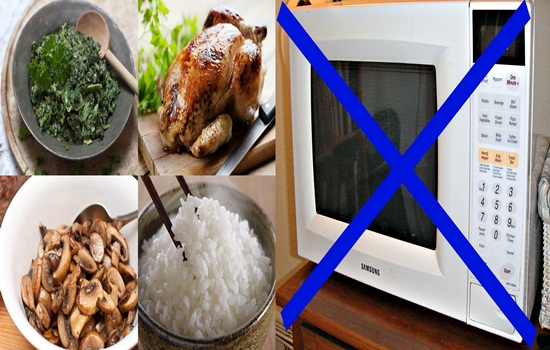 How To Make Your Eyes Look Younger By Makeup

What is The Job of Vitamin C in the Body?

Enjoy your Diet with These Healthy Tips

The Mystery Of The Thyroid Gland Revealed

5 Hygiene Habits You Should Teach to Children