While most of us are more concerned about the health of our hearts, kidneys and liver, only a few of us are concerned about the well-being of our pancreas unless it gets sick.
The pancreas is suited behind the stomach in the abdominal cavity and it has two main functions which are very important for the overall health, one is producing insulin to control blood sugar levels and two is producing enzymes to help in the digestion of fat and protein.

Besides insulin, the pancreas also produces other important hormones like polypeptides, glucagon and somatostatin. It also helps the body to absorb nutrients from the food you eat and make good use of it.
If anything wrong happens to the pancreas, certain health issues can rise up such as pancreatitis, diabetes and pancreatic cancer.

The main cause for pancreatic malfunction is not exactly known, however it was proven that lifestyle and diet can affect the pancreas either negatively or positively. Indeed there are many food elements that contain natural healing and protective properties for the pancreas and below presented a list of the friendliest foods for the pancreas.

Turmeric is a popular spice that gets used in many dishes in different cuisines. The spice contains powerful cancer-fighting properties that inhibit the growth of cancerous cells in general, one of the cancer types turmeric was shown to be effective in reducing the risk rates of is pancreatic cancer.
Moreover, turmeric contains anti-inflammatory properties that can protect the pancreas as well as other organs from inflammation such as in the case of pancreatitis.
Turmeric when added to meals or enjoyed as a tea was shown to control blood sugar levels in diabetics after meals due to its ability to improve the production of insulin.
You can take advantage of the pancreas-protecting properties of turmeric by having at least one cup of turmeric tea every day.

Broccoli and other fruits that belong to the cruciferous vegetables family contain considerable levels of sulfur, a compound that helps in detoxifying several organs of the body including the pancreas.
Cruciferous vegetables in general and especially broccoli help in reducing the risk rate of several types of cancer including pancreatic cancer, they also contain properties that help in renewing and repairing damaged cells.

All berries are rich in antioxidants and blueberries in particular which helps in reducing the oxidative stress resulted from the concentration of free-radicals in the bloodstream that leads to several types of cancer including pancreatic, lung, stomach and breast cancer.
Blueberries were also found to help reducing the levels of blood sugar in type-2 diabetics and reduce the vascular damage caused by diabetes to the pancreas.

Sweet potatoes are rich in beta-carotene which acts as powerful antioxidants that help in sustaining overall health.
Sweet potato helps in regulating the production of insulin and the stabilization of blood sugar by producing sugar to be used as energy gradually in the bloodstream which in turn doesn’t put a stress on the pancreas.
Sweet potatoes also aid in digestion and reduce the absorption of cholesterol which is another way to aid the pancreas does its job effectively.

Garlic is a super food and a natural treatment for many ailments; it is rich with the powerful antioxidant and anti-inflammatory compound allicin.
Allicin as well as other beneficial nutrients found in garlic such as oligosaccharides, flavonoids, sulfur, selenium and arginine help to treat diabetes and enhance its function by stimulating the production of insulin.
Garlic will work more effectively if eaten raw, so opt to eat or swallow two garlic cloves on an empty stomach or consult your doctor to take garlic supplements. 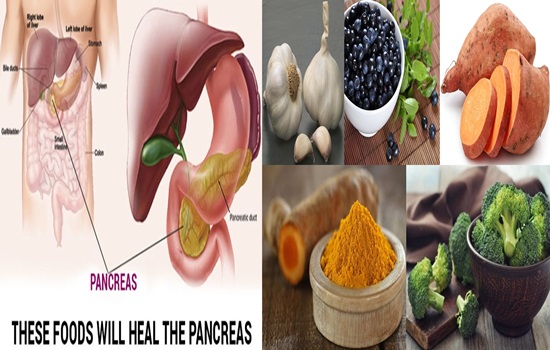 What A Glass Of Water Does To Our Body? You Will Be Amazed

WHAT DO YOU KNOW ABOUT THE REVITALIZING FOODS FOR BODY AND BRAIN?

Ten Beauty Habits To Do Every Night

The Wonderful Beauty Benefits Of Honey