Despite the improved public understanding of depression over the years, we still frequently overlook or misunderstand the symptoms of depression. Because of incorrect assumptions about how depression manifests, too many people go undiagnosed, and this results in a number of people whose depression is hidden. They may develop ways of coping with their problems, concealing their illness from those around them. We need to renounce the assumption that suffering is always clearly visible so as to better recognize and help those who struggle that go unseen.

Due to cultural stereotypes and media, we have assumptions about how a person with depression would behave. We imagine someone who constantly looks miserable, does not dress well and rarely leaves the room, but not all people with depression behave in the same way.

The symptoms and coping abilities of people with depression differ; many can keep up a façade of good mental health, though they are not suffering any less. Likewise, those who cannot keep up such a façade are not less strong than those who can.

People with hidden depression may complain about always being tired and often seem exhausted. Constant exhaustion is a prevalent side effect of depression; it is extremely common and one of the hardest side effects to cope with. A person with undiagnosed depression can get plenty of sleep each night and still wake up feeling like they only slept few hours.

They may even blame themselves believing their laziness causing their low energy levels. This symptom is difficult to conceal for those who are diagnosed with depression but try to keep it from their peers, as it often affects their personal relationships and workload.

Another symptom of depression is an uncharacteristic lack of interest in activities for an extended period of time because depression is as mentally draining as it is physically draining, which makes it difficult to enjoy all the things you usually do. 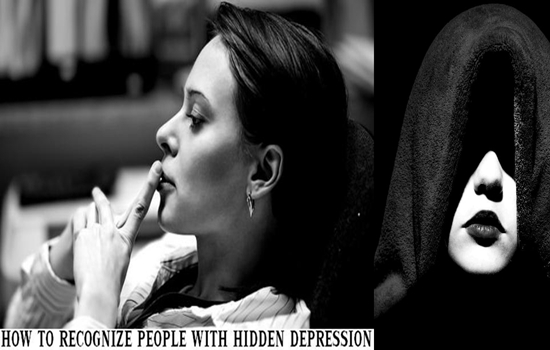 How to Make an Inexpensive Green Stick Deodorant in 4 Steps

How To Keep Your Nail Polish For Longer?

SIGNS OF TOXIC PEOPLE & HOW TO DEAL WITH THEM

How to Make an Inexpensive Green Stick Deodorant in 4 Steps

How To Keep Your Nail Polish For Longer?

SIGNS OF TOXIC PEOPLE & HOW TO DEAL WITH THEM

HEALING YOUR WORTHINESS ISSUE IS THE CURE FOR MANY LIFE'S PROBLEMS

HOW TO STAY MOTIVATED AND KEEP FROM QUITTING

How Much Vitamin A Should Be Consumed During Pregnancy

DO YOU KNOW THAT INTROVERTS CAN BE IRRESISTIBLY ATTRACIVE?

The 10 Most Important Tips You Should Apply before Your Wedding

Ladies, find out how to lose weight

MORE ABOUT PERFECTIONISM & HOW TO CURE IT

10 Astonishing Facts You Might Have Not Known about Sweat

Some natural treatments for reducing cellulite