Sociopathy is a condition that prevents people from adapting to the behavioral and ethical standards of their community, and it is also known as antisocial personality disorder. Sociopathic persons can cause harm to themselves and others, exhibit criminal behavior and organize dangerous cults.

Signs of a sociopath include having a disregard for the law,
frequently telling lies and showing lack of remorse. However, sociopaths are usually charismatic and charming, and their personality is described as magnetic, that is why they generate a lot of praise and attention of others.

A sociopath often feels overly entitled to certain things and positions, and they disregard the opinions of others believing theirs are the absolute authority. They have trouble suppressing their feelings of impatience or anger, and they respond hastily to these emotions lashing out at others.

Sociopaths seem to act outside the realm of social norms; they exhibit abnormally daring and spontaneous behavior. They may do risky and outrageous things without assessing the repercussions. They can be criminals and have a criminal record due to their tendency to disregard the law; they may be crooks or even murderers. Sociopaths can easily fabricate stories and make untruthful statements because they are professional liars, and their lies sound convincing with their assertiveness and confidence.

Sociopaths get bored easily and have a low tolerance for boredom requiring constant stimulation. They are good at convincing others to do what they want, either through aggressive means or their charm, and as a result their coworkers and friends may find themselves doing what the person wants.

Sociopaths are not capable of experiencing shame or guilt when they do something that hurts other people; they lack remorse and rationalize their actions. They tend to seek positions of leadership, and they are manipulative trying always to dominate the people around them. 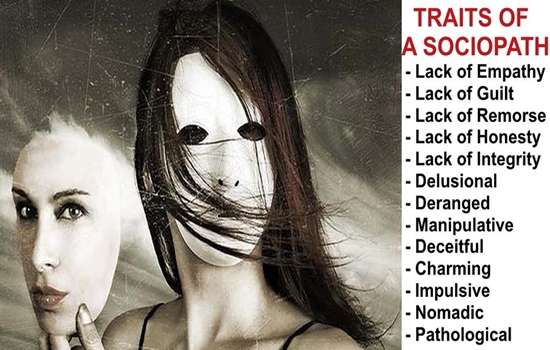 How To Make Your Makeup Last Longer

How To Control Excessive Sweating

How to Choose the Perfect Floor Tiles for your Comfortable Home

How To Make Your Makeup Last Longer

How To Control Excessive Sweating

How to Choose the Perfect Floor Tiles for your Comfortable Home

Natural Easy Treatments To Get Rid Of Mouth Ulcers Fast

THE MOST COMMON THINGS TRULY HAPPY PEOPLE DO

IS FRYING WITH OLIVE OIL HEALTHIER FOR YOU?

Why Around Your Period You Gain Weight?

9 Tips to reduce the pain of waxing