Sometimes we fall into the common mistake of mixing different household products throughout our cleaning process. By doing so, you are creating an entirely new product that could liberate dangerous fumes and be very harmful. Here are some examples of mixtures which are capable of killing you that you need to avoid:

6. Mixing Hydrogen Peroxide and Vinegar : Even though you may think the combination is harmless, it is not quiet safe to mix hydrogen peroxide and vinegar. It produces peraceitic acid which is very harmful to your skin, reparatory system and eyes. Avoid spray cleaners containing this combination in the same bottle.

5. Mixing Bleach with Ammonia : When you mix bleach with ammonia, chloramines are released as vapors. Chloramines are harmful to the eyes and inhaling such vapors is very poisonous and deadly.

4. Mixing Alcohol and Bleach : Mixing alcohol and bleach is an absolute disaster. It basically results in a mixture of chloroform and hydrochloric acid. Use bleach alone and it will do the job but never mix alcohol with bleach.

3. Mixing Baking Soda and Vinegar : Adding baking soda to vinegar only leaves you with water and sodium acetic acid since vinegar is acidic and baking soda is neutral. Besides, the combination forms bubbles and there may be a chance of explosion if you put them both in a shut holder.

2. Mixing Different Kinds of Cleaners: : Different cleaners are made up of different chemicals that may not be safe to combine. Use each cleaner for the particular purpose it is made for without adding up another product thinking it’ll double its effect.

1. Mixing Chlorine Bleach and Vinegar : Both chlorine and vinegar are acidic solutions. Acids, in general are very risky to deal with. When you mix chlorine with vinegar, it releases chlorine fumes which are toxic. 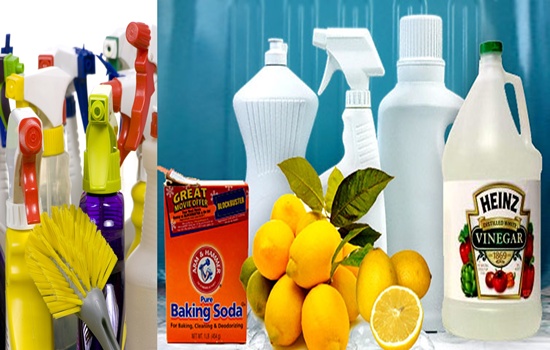 What's a Heat Stroke and How Can We Avoid It?

Six Reasons To Drink Whole Drink Instead Of Skimmed Milk

Normal And Abnormal Vaginal Discharge And When To Worry

How To Cure Cold And Flu Naturally