You done smoke, and you don’t sit around smokers so you feel you are safe right?
Not so fast, there are several studies proved that different habits when done on regular basis can put you at equivalent health risks to that smoking does, like sitting for prolonged periods, eating too much fat, excessive drinking and more. Below we brought you different studies that proved that different acts can be as bad for your health as smoking, fortunately these habits can be easily modified and left alone unlike smoking that takes some effort to quit, check out below what you could be doing in your daily life that could be as bad as smoking for your health.

Even if you exercise regularly, prolonged sitting has been strongly linked to several health issues according to Alberta Health Services – Cancer Care in Canada. Physical inactivity is linked to 160.000 cases of breast, colon, prostate and lungs cancer cases every year which is almost two thirds as many cancer cases caused by smoking.

2- Eating Too Much Animal Protein.

Animal meat is rich in a hormone called IGF-1which strongly promote the growth and spread of cancer cells, University of Southern California published in the journal Cell Metabolism recently concluded that people on high animal protein diets were four times more likely to die of cancer in their middle age than those on low animal protein diets, an equivilant mortality rate to smoking.

If your home is equipped with a gas stove then you are likely to be getting an added dose of carbon monoxide, nitrogen dioxide and formaldehyde which are three contaminants found in cigarettes smoke. In a study made by the Environmental Health Perspective in 2013 found that those three contaminants in homes are exceeding public health guidelines.

Even if you use an electronic stove at your home you are still not immune to cooking pollution effects, studies done on restaurants and residential kitchens found that high heat cooking with shortenings or soy beans oil which is often called vegetables oil release aldehydes, and polycyclic aromatic which are contaminants found in second hand smoking linked to airways inflammations.

A study made by the Journal of the American Medical Association estimated that I door tanning causes about 420.000 cases of skin cancer yearly in the U.S alone smoking in comparison causes 226.000 cases.

6- Not Getting Enough Sleep.

Chronic sleep deprivation triggers high blood pressure, obesity, heart attack and stroke alongside with several other health issues, one study showed that not getting at least six or seven hours of sleep every night led to high mortality rates similar to smoking, even getting poor quality sleep when the cycle between light and deep sleep keeps getting interrupted showed to accelerate the growth of tumors cells. 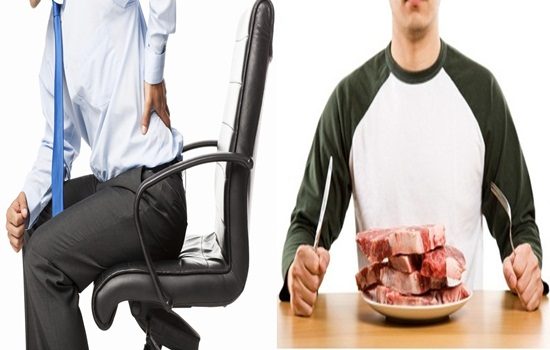 How To Deal With A Loved One With Mental Illness

3 Natural foods that can relieve anxiety

Warning These 3 Foods Contribute to Your Depression

Five Things To Do When You Have Soar Throat

The Top 4 Reasons Why It’s Best to Start Your Diet in Summer: