Although there is no specific cure for Arthritis, certain foods have been have been proven to fight inflammation, boost Immunity and strengthen bones which can in return helps in reducing or easing Arthritis symptoms and increase mobility, the following list consists of the best foods to prevent or reduce Arthritis symptoms.

Certain types of fish including salmon, herring, tuna and Sardines are loaded with inflammation fighting omega-3 fatty acids, omega-3 helps to balance the ratio of omega-6 which increase inflammation.

If you are not a fan of fish then load up on heart healthy soy beans that is another rich source of omega-3, soy beans also contain high levels of fiber and protein for healthy heart and arteries.

Olive oil is loaded with healthy fats that are great to boost the cardiovascular health as well as containing oleocanthal which acts as non-steroidal anti-inflammatory drugs, sunflower oil and avocado oil also contain anti-inflammatory properties and walnut oil was shown to have ten times more omega-3 than olive oil.

Cherries were proven to reduce gout attacks due to its content of anthocyanins which were shown to have inflammation reducing properties, anthocyanins are also found in other dark red and purple fruits and vegetables like strawberries, blackberries and blueberries.

Rich broccoli in vitamin K and C also was found to contain a compound known as sulforaphane which researchers proven to slow down the progression of inflammations in the joints and reduce pain and inflammation. 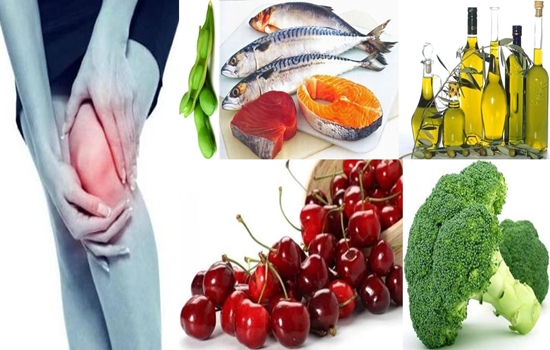 Beauty Benefits Of Castor Oil For Skin And Hair

DO YOU KNOW THE HEALTH BENEFITS OF BASIL?

How To Control Adrenaline Rushes

How To Reduce Or Stop Your Hands Shakiness

Do You Bruise Easily? Check out the Causes Here