The brain is the organ that is responsible for all body functions, so you need to make sure to keep it safe and protected, there are daily habits that have a damaging effect on our brains, ditch those habits to keep your brain health protected. Here’s a list of the brain damaging daily habits we all have.

The brain needs stimulation to maintain its health. Neuroplasticity is the ability to think and learn different things, it is also the ability to retain memories and make new connections, lack of intellectual stimulation for the brain will cause it to slowly atrophy.

A study conducted in Japan claim that those who habitually skip on breakfast are 30% more likely to suffer a brain hemorrhage than those who don’t.
Skipping on breakfast slows down the metabolism which will make you sluggish and not thinking clearly, not providing nutrients for your brain after a long fast during the night will cause your brain to shut down some functions.

The radiations coming from the cell phones are damaging for the body cells including brain cells. Put away your cell phone when going to bed to avoid the harmful radiation as well as enjoying a sound sleep.
Also opt to limit putting your cell phone near your head, use a headset instead in order to avoid headaches and confusion.

Overeating can cause obesity and often the people who are overeating consuming foods that are poorly nutritive so they remain hungry and eat even more. Obesity is linked with low brain volume and dementia.

Being a social individual protect your brain in many aspects, when you communicate with orally, that activate and exercise different parts of the brain that communicating with people by writing, also depression and anxiety that affect the mental health are often caused by lack of social interaction.

The value of regular, adequate and good quality sleep duration is renowned for its health benefits, the brain is equally active during sleep as while awake, however very important activities take place during sleep which are long-term memory storage and the elimination of toxins, lacking sleep increase the risk of many diseases including neurodegenerative ones.

A 2007 research says that smoking more than three cigarettes a day cause neuronal viability and cell membranes in the midbrain as well as cell membranes at the cerebellar vermis.
These are the parts in the brain that are responsible for gross motor function, balance and coordination. 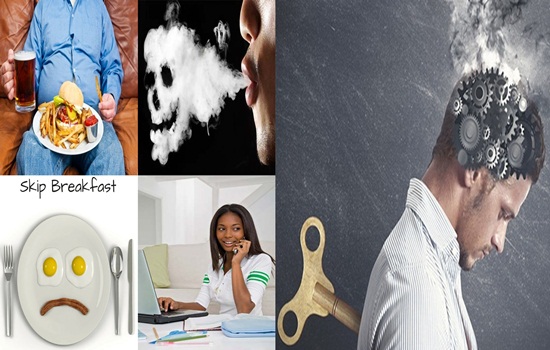 MORE TIPS TO POWER UP YOUR BRAIN, PART II

MORE ABOUT REVITALIZING FOODS FOR BODY AND BRAIN, PART II

Three Foods That Damage Your Brain

Best Foods to Boost the Brain

Health Benefits Of Coffee, Good For Your Heart, Brain And Liver

MORE TIPS TO POWER UP YOUR BRAIN, PART II

MORE ABOUT REVITALIZING FOODS FOR BODY AND BRAIN, PART II

Three Foods That Damage Your Brain

Best Foods to Boost the Brain

Health Benefits Of Coffee, Good For Your Heart, Brain And Liver

Common Pregnancy Problems That Are Not Dangerous

Discover The Health Benefits And Risks Of Caffiene

Four Guts Problems That Are Incredibly Normal And Common

Causes And Solutions Of Hair Loss

The best types of food a pregnant woman should eat!